The 2022 Bradley Family Harvest Run will feature a 1-Mile Walk, 5K Run/Walk, and a 10.2K Run designed to showcase the natural beauty of Southwest Michigan as well as the Andrews University Campus and Arboretum. The run will take place on Sunday, September 25, rain or shine, on the campus of Andrews University. Students, alumni, community, and faculty/staff are all welcome!

Come enjoy the beautiful views of Andrews University’s central campus and (for the 10k) challenging forest trails. Run past iconic scenes such as the J.N. Andrews Statue, the Globe, and Buller Arch. The 5k and 10k will both be chip-timed, whereas the 1-mile walk is geared toward the experience not the time. 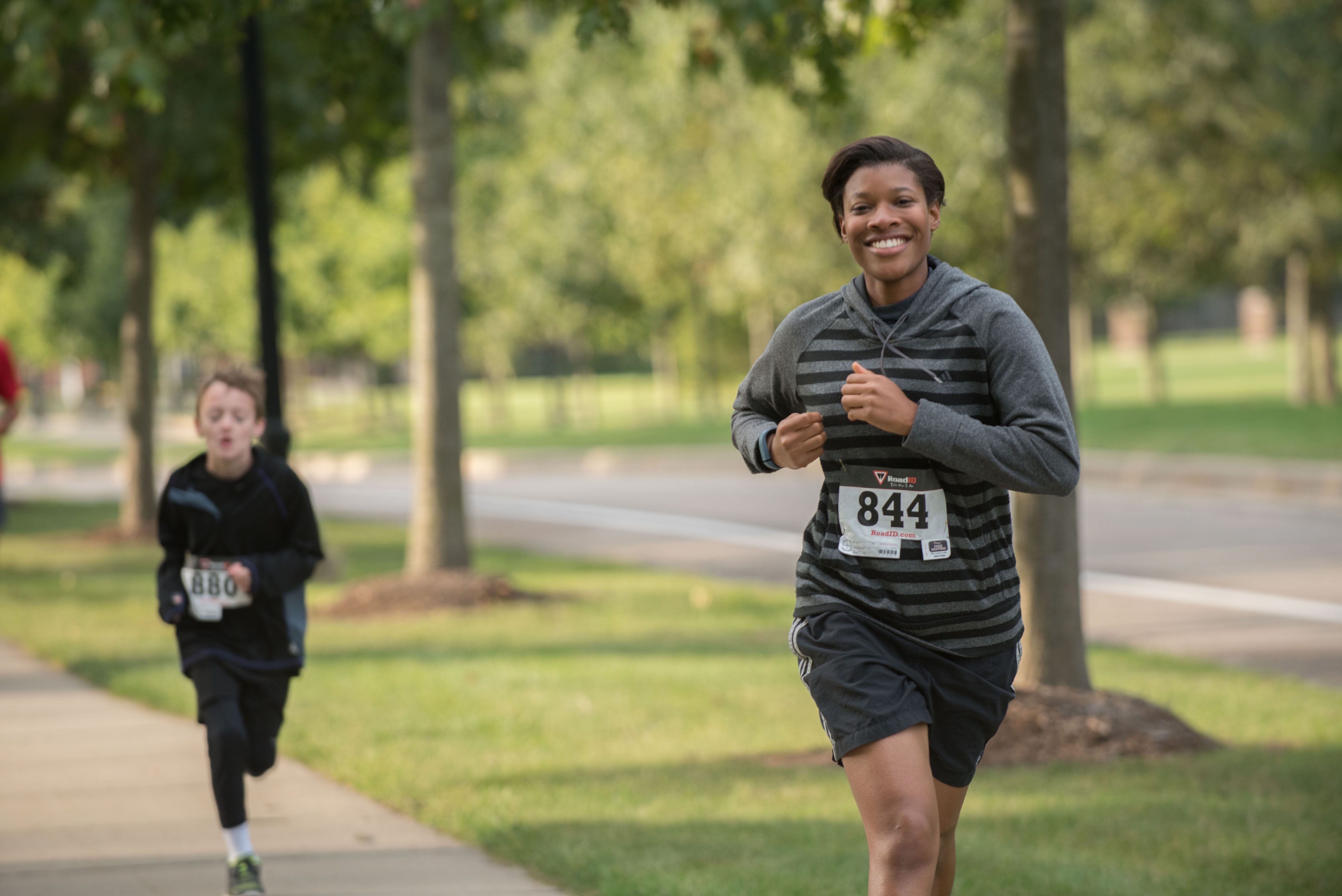 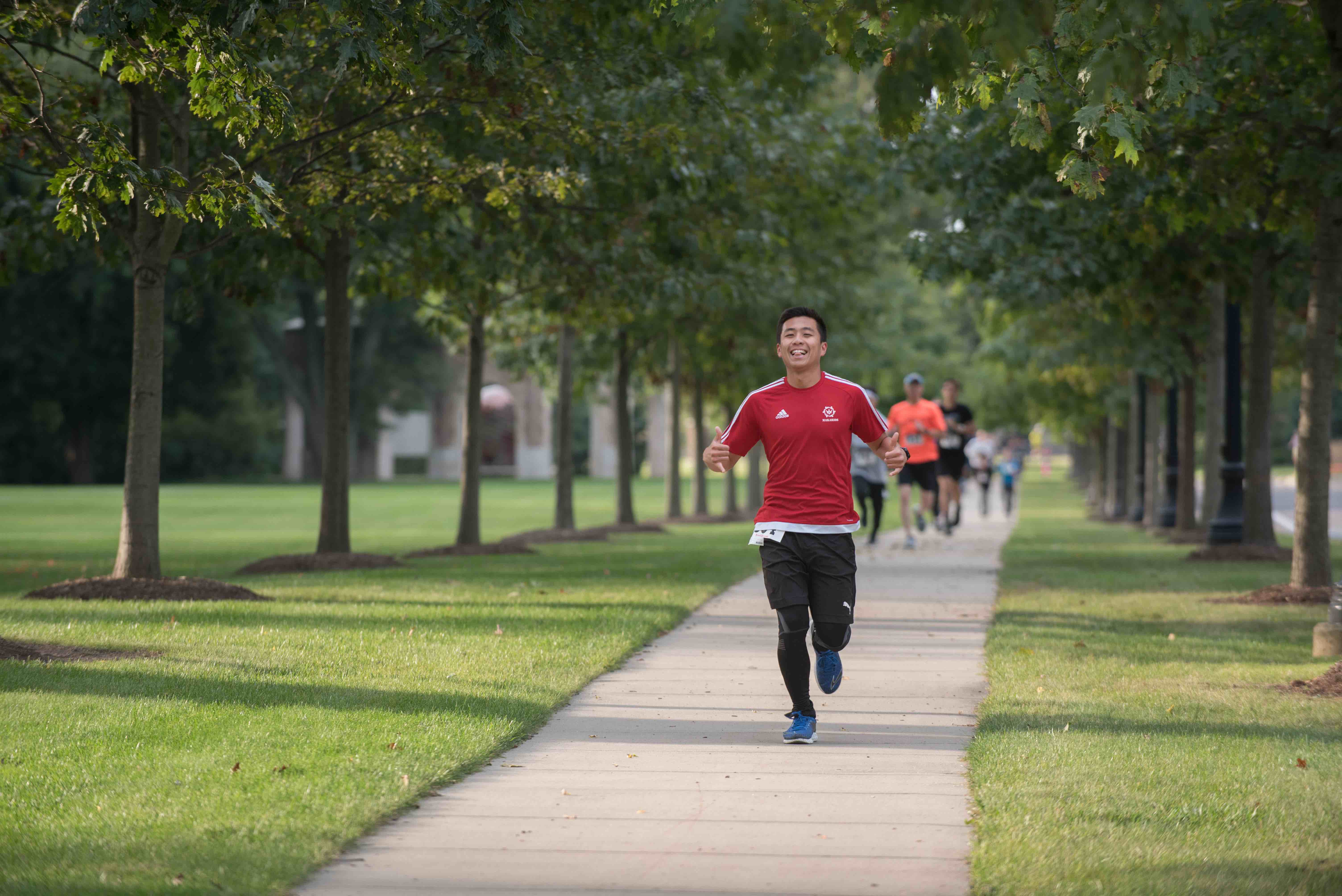 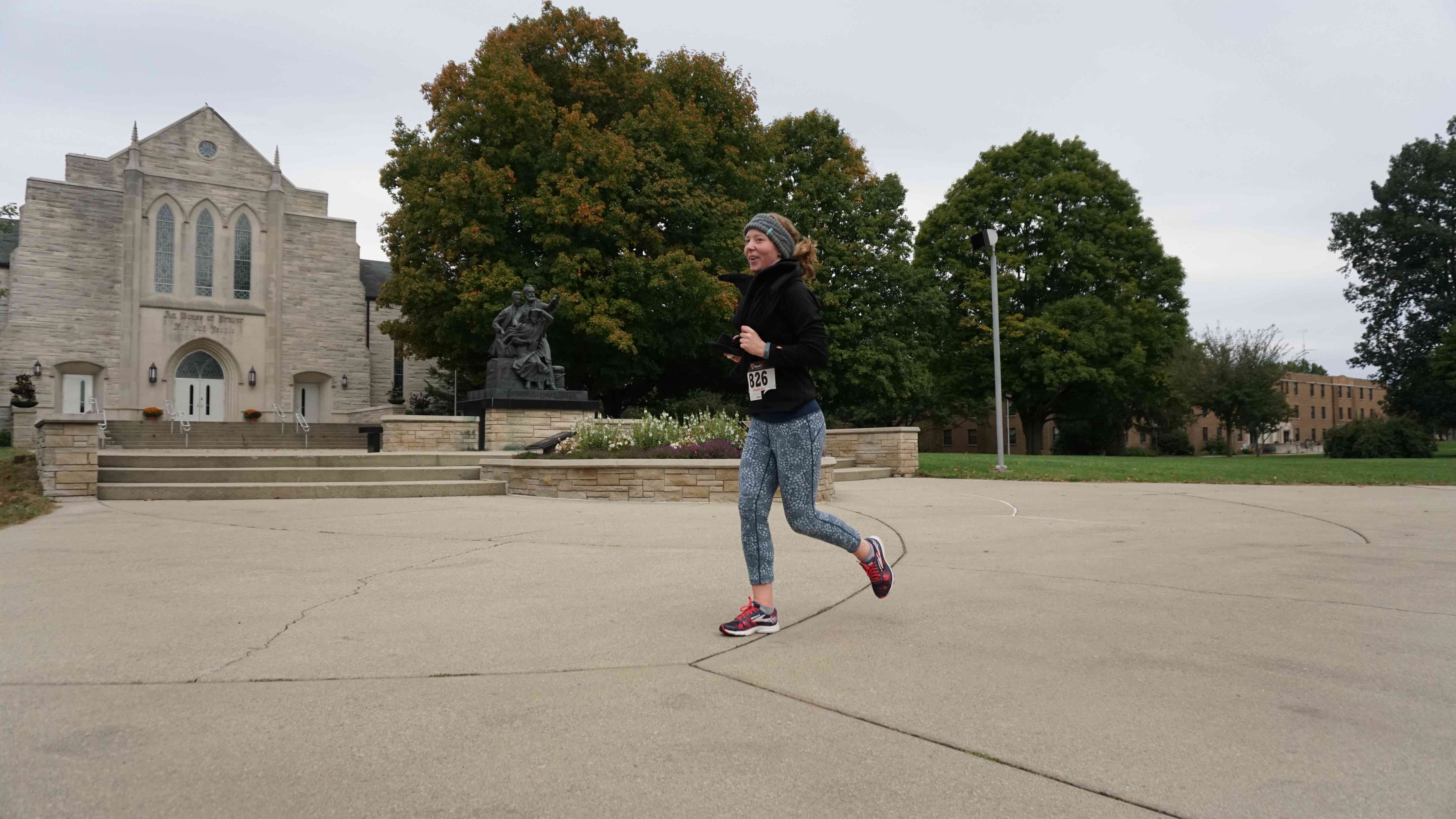 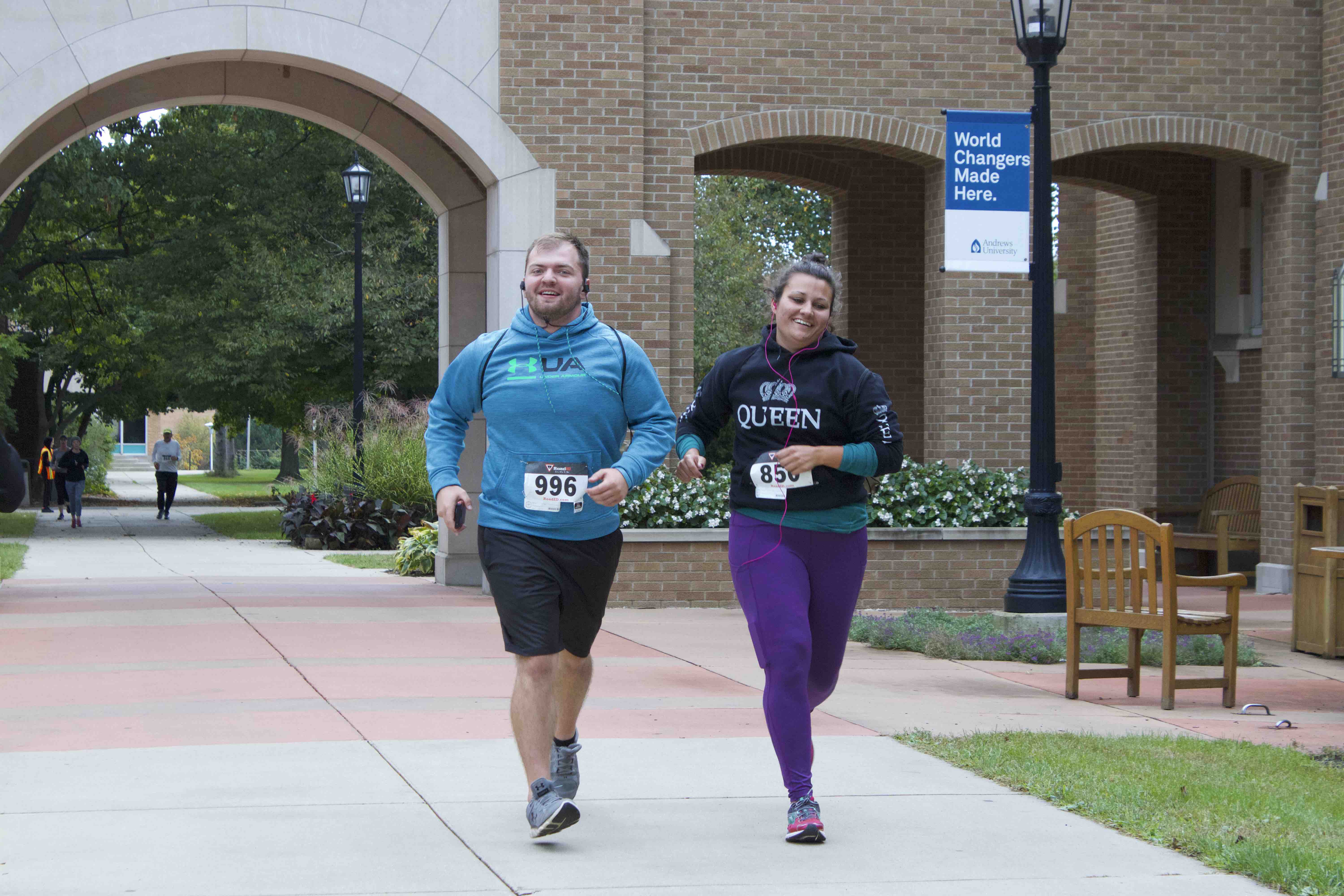 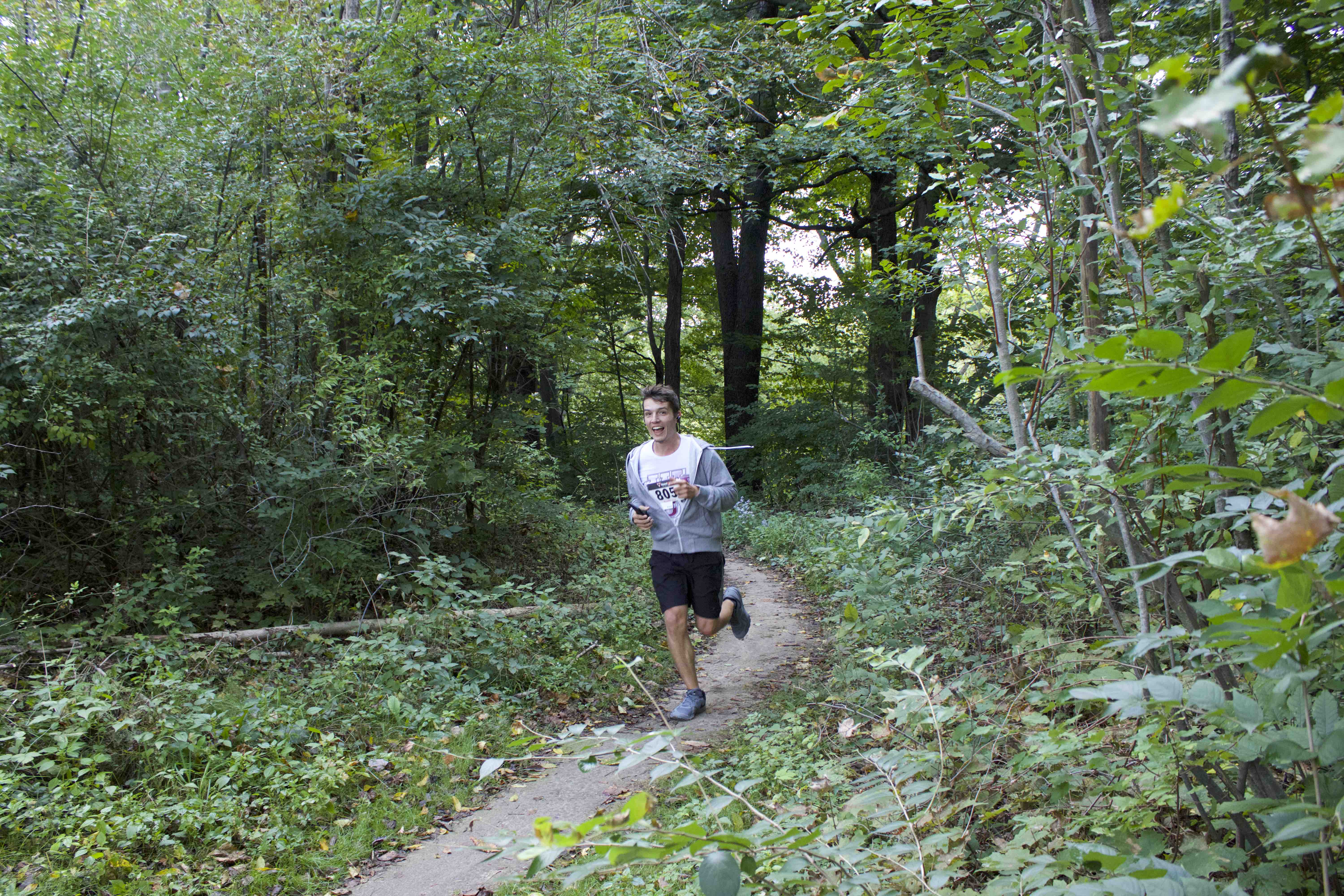 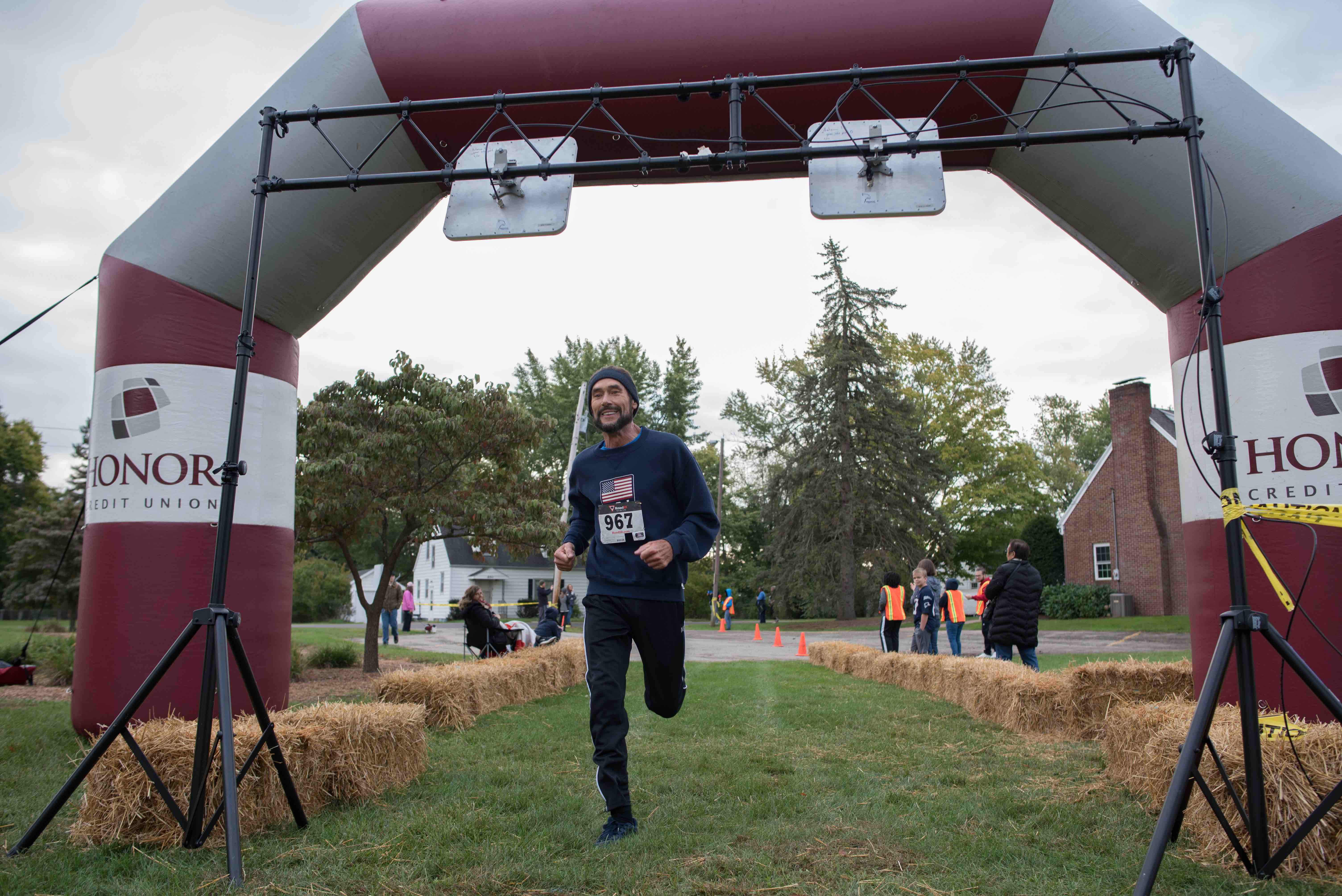 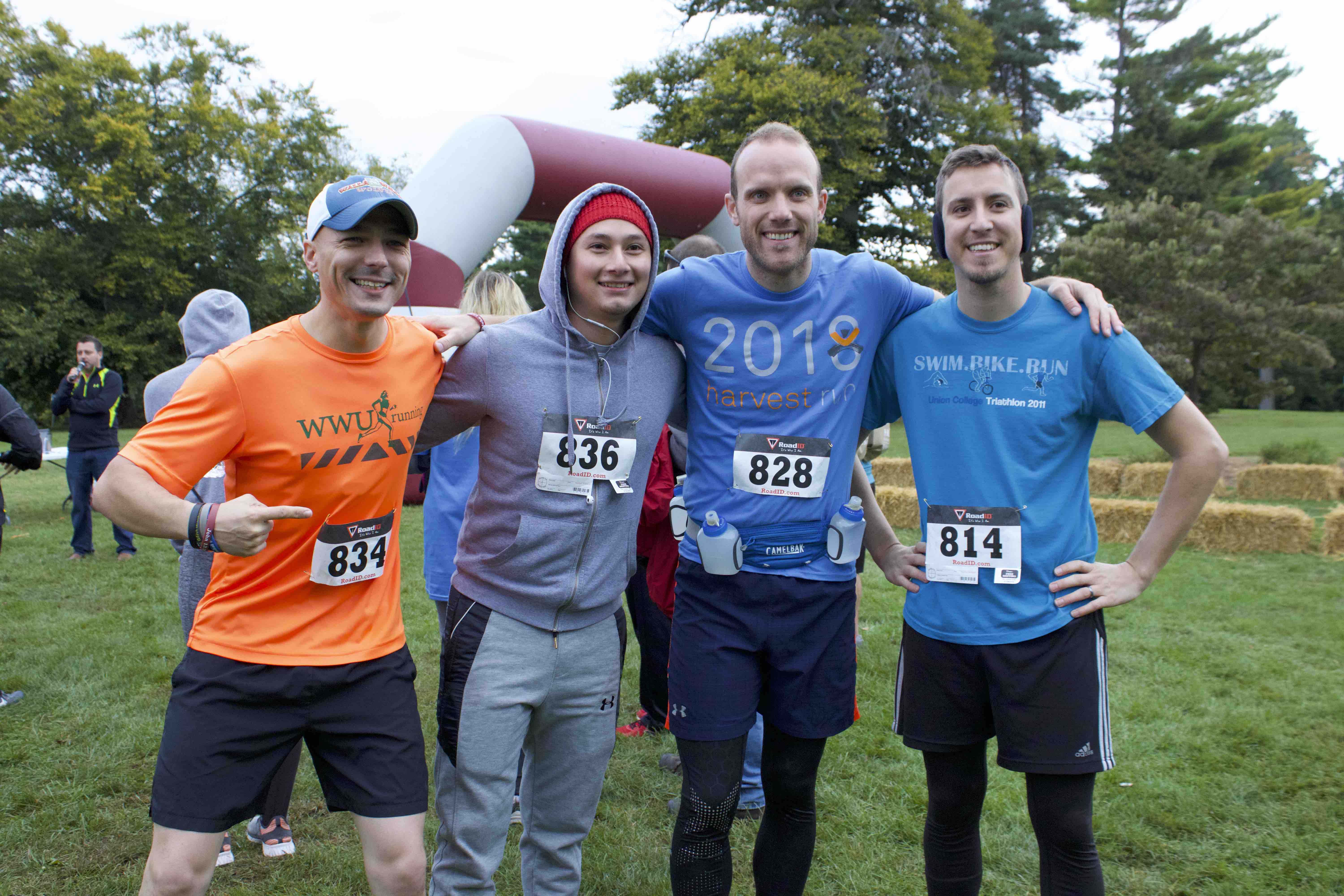 The 1-Mile Walk heads out past Chan Shun Hall and the Howard Performing Arts Center before turning right on Grove Avenue. You will come back through the J.N. Andrews Boulevard past the iconic AU Globe before heading back toward the finish line by the new Andreasen Center for Wellness.

The 5K route highlights the beautiful center campus of Andrews University. You will speed around East Campus Circle Drive before following the paved apartment trail and International Court. Next, you will take Garland Avenue over to the J.N. Andrews Boulevard, striding past the AU Globe. You will then turn into center campus where you will run by the J.N. Andrews sculpture and Flag Mall, and pass underneath Buller Arch before finishing by the Andreasen Center for Wellness. This 5k route should be flat and fantastic!

We will be using a similar 10k route to in 2018, taking out that first steep, rough climb to the trails and replacing it with a more gradual approach that is a tiny bit longer but much easier to run up!  You’ll still get to enjoy the challenging but scenic excursion through our beautiful, hilly, winding trails of Andrews University ending with a climb up Dairy Hill back to campus, PLUS all the features of the 5K route.  If you enjoy trails and running, you won’t want to miss this beautiful course!

Note: Some users reported not being able to see the embedded map above. If you do not see the map above simply click here to view it in Google Maps.

To ensure easy viewing the map is offset from the actual trail by several feet. Map is meant as a visual representation only. Actual course is properly measured and will be precisely timed by professional timing system.

We are honored to announce the renaming of the Harvest Run to the Bradley Family Harvest Run beginning in 2021, thanks to the generous endowment by Dr. Fay Bradley which will enable us to continue offering the Bradley Family Harvest Run to the Andrews University and Berrien community for years to come. Fay Bradley, JD, MD, a veteran who was employed full-time as a physician before his retirement, was an avid runner who redefined what is possible for masters running. At age 45, he raced a 2:26:45 marathon in the 1983 Boston Marathon. Two years later, Bradley won the Lombardi 10k in Washington, D.C. In 1990, he ranked sixth in the master’s mile, racing a mile in a blisteringly fast 4:40.08 two seconds ahead of seventh-place James Ryun, who was a silver medalist in the 1968 Olympics and widely considered the world’s top middle-distance runner for years.

Bradley excelled in his younger years as well, starting his running career as a hurdler and quarter-miler. Decades later, he would fondly speak of his first two pairs of running shoes, reminiscing about his black and white high-top Converse All-Stars. Bradley finished in second place in the Kansas State High School Championships in the high and low hurdles as well as on the 4×440 relay team. In 1958, Bradley won both the high and low hurdles at the junior college national championships, and was the Kansas Relays high hurdles champion in 1959. It wasn’t until his mid-30s when Bradley became competitive at distance road racing, however, attributing his brother Earl (a 24-time Boston Marathon finisher) with getting him into running. Bradley qualified for his first Boston Marathon in 1975, racing an impressive 2:51 marathon at the age of 37. In total, he raced the Boston Marathon 34 times—an astounding accomplishment, as those who know the difficulty of earning a spot into the Boston Marathon can attest! He finished third in the men’s 50-and-over competition in 1991, placing 275th overall and earning mention about his accomplishment in the Washington Post. In 1994 he raced a 2:39:47 marathon and was ranked among the top three or four 55-to-59 competitors in the United States. Bradley was also an Abbott World Marathon Majors finisher and USA Track & Field Masters Hall of Fame member (2003).

In addition to his many impressive running achievements, Bradley had a heart for others and made a point of giving back to both the running community and to Andrews. He served as the president of the American Running and Fitness Association for years, and wrote articles on injury prevention for runners. In 2015, he was given the Andrews University Spirit of Philanthropy award. He was quoted as saying “My interest and focus at this time is to promote an active lifestyle for the general masses. Everyone should have a regular physical activity to participate in.” Running Times, March 1995. Bradley passed away on January 14, 2021, one day after his 83rd birthday, after a battle with cancer.

We are so grateful to Dr. Bradley for his interest in promoting running within our community, and are proud to now introduce the Bradley Family Harvest Run.

Thank you for volunteering for the Bradley Family Harvest Run! There are multiple areas where we need volunteers. Our volunteers are an invaluable help – we couldn’t put on this event without you!

Please fill out the below form if you are interested in volunteering!

Thank you for your interest in sponsoring the Bradley Family Harvest Run! Being a sponsor will give our 100+ participants exposure to your company/brand. We have a variety of sponsorship opportunities available. Please feel free to browse the options below and fill out the sponsorship form to become a Bradley Family Harvest Run sponsor, or contact us directly by email at alumni@andrews.edu or by phone at (269) 471-3591 to discuss custom sponsorship options.

Click on each tab above to see sponsorship level details.